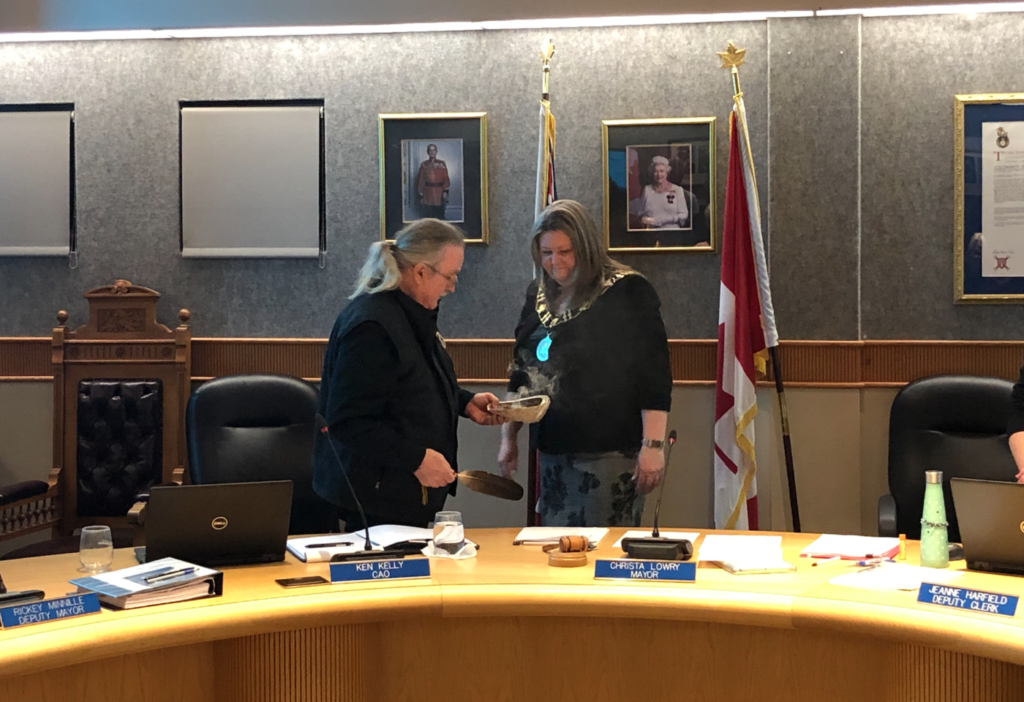 I think I may just start looking forward to Council meetings! Those of you who didn’t attend last Tuesday’s meeting missed a truly inspiring experience.  And, apart from the very moving ceremony that Elder Larry McDermott led, the rest of the evening was very civil and productive.

Recordings of the Council meeting and the Committee of the Whole meeting can be found at here and here.

This Council meeting report will focus on aspects of the meeting of particular interest to me; namely aspects that reflect good governance (or not), and aspects that address issues with a societal or environmental component.

First, a little background on events that culminated in the invitation to two special guests, Dr. Larry McDermott, an Algonquin Elder from Shabot Obaadjiwan First Nation and Executive Director of Plenty Canada, and Mireille Lapointe, former Chief with Ardoch Algonquins.

In the past, our Municipal Council has acknowledged the presence of Indigenous Nations on this land before the arrival of settlers. This year Mayor Christa Lowry who had attended a blanket exercise led by Mireille Lapointe, former Chief of the Ardoch First Nation, committed to developing and providing a meaningful experience of this acknowledgement, as a first step in renewing in an official way, the friendship between the Algonquin people and settlers.  To this end, Mayor Lowry invited Dr. Larry McDermott , an Algonquin Elder from Shabot Obaadjiwan First Nation and Executive Director of Plenty Canada and Mireille Lapointe, to participate.

To start the meeting, Mayor Lowry shared a story of her own family who had enjoyed a close friendship and good neighbourly relationships with Joe Bay and his Algonquin family who lived in this area many years ago.

After introductions by the mayor, Elder McDermott and Mireille Lapointe shared a smudging ceremony with our elected officials whose participation on behalf of us all symbolized a “Nation to Nation” event celebrating a renewal of our relationship.  This was my very first experience of the smudging ceremony, and I am very grateful to Mayor Lowry and Mississippi Mills All My Relations organizers Sue Evans and Bev Hunter for making this possible.

For those of you who, like me (until now), are unfamiliar with this ceremony, it is a custom of Indigenous Peoples to create a cleansing smoke bath ritual to purify body, mind and spirit.

This happens, for example, in preparation for a meeting before discussions take place.  The ceremony begins with the Elder lighting with a match, Indigenous medicines consisting of tobacco, sweetgrass, sage and cedar mixed in a shell or ceramic bowl and using an eagle feather to fan the medicines until they smolder.

The plants used have different significations:  tobacco to open the door to the spiritual world and carry our prayers to the Creator, sage to eliminate negative energy, cedar to offer protection and grounding, and sweetgrass to teach kindness.  The Elder then takes the bowl and offers an opportunity to anyone in the gathered circle to bathe different parts of their body with the smoke from these four medicines.

This opportunity was offered to all the Councillors and Staff members seated at the table.  This ritual was profoundly moving and seemed to captivate everyone in attendance.  Although I tend to be a little wary of rituals in general, I was truly affected by this ceremony – I could feel joy and hope in the air, and a sense of community with everyone there.

Following the smudging ceremony, Mayor Lowry read the land acknowledgement statement that had been carefully written through consultation with Elder McDermott and with support from Councilor Jan Maydan and representatives from Mississippi Mills All My Relations, Bev Hunter and Sue Evans.  The acknowledgement which is now part of the official record is the following:

We acknowledge that this sacred land on which Mississippi Mills is now located has been a site of human activity for over 10,000 years and is rich in Indigenous history. This land is the ancestral and unceded territory of the Algonquin Anishinaabe Nation. We are grateful to the Algonquin ancestors who cared for the land and water in order that we might meet here today.

Before settlers arrived, this territory was subject to the Dish With One Spoon Wampum Belt Covenant, an agreement between Anishinaabe and Haudenosaunee Nations to peaceably share and care for resources. After settlers arrived, it became subject to the Three Figure Wampum Belt, last carried by Algonquin Elder William Commanda, which commemorates the sharing of this land with English, French and Indigenous Nations under the governance of Natural Law.

We recognize with gratitude the knowledge and contributions that the Algonquin Peoples bring to the Municipality of Mississippi Mills. Today, Mississippi Mills is also home to other Indigenous peoples from across Turtle Island. We extend our respect to all First Nations, Inuit and Métis people for their valuable past and present contributions.

We are mindful of broken covenants and the need to reconcile with all our relations. Together, may we care for this land and each other, drawing on the strength of our mutual history of nation building through peace and friendship being mindful of generations to come.

Elder McDermott explained the significance of each step in this ceremony as he went along.  He also stressed, echoing Mayor Lowry’s affirmation of the friendship between her grandparents and the First Nations people, the positive interactions between immigrants to this land and his people.  (Any negative interactions were completely absent from Elder McDermott or Mayor Lowry’s comments.)

He displayed a copy of the “Pledge of the Crown” wampum belt created and given by the British in 1815 that he carries, and explained that it was an expression of love and peace between the British Crown and a large gathering of different Indigenous tribes.  This belt expressed a sacred promise that the Crown would not interfere with their right to possess and govern all the land that was theirs before the war.

In his Call for Action Elder McDermott made several references to the report issued by the Truth and Reconciliation Commission, and the commitment in this report by the Government of Canada to align our cultural values with those of the First Nations so that we ALL honour our Earth by protecting and nurturing our natural environment – by combining modern science and native wisdom to live as ONE with Nature.  Elder McDermott also called on all of us to honour cultural diversity in Canada – to live in harmony with other people.

This being the year 2020, the year of perfect vision, would that we all heed Elder McDermott’s Call for Action by matching our actions to these goals!